Released in December 2016 as part of the 100th birthday celebrations for James Herriot, All Memories Great & Small is the ideal companion book to the classic BBC series. 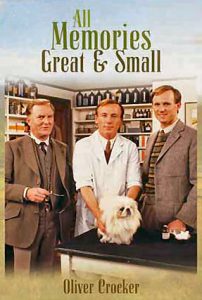 Every episode is accompanied by exclusive memories, thanks to 60 new interviews with cast and crew. Stars Christopher Timothy, Robert Hardy, Peter Davison and Carol Drinkwater are joined by dozens of guest stars and members of the production team, many of whom have never shared their memories of making this television classic before. Tributes are also paid by family members of those no longer with us.

This book is also packed with insight into all 90 episodes, including original synopses, credits, production and transmission dates, viewing figures and dozens of previously unpublished behind the scenes photographs.

The author is Oliver Crocker, who was inspired to write the book after a visit to the World of James Herriot museum in 2015. There is also a Foreword by Rosie Page, daughter of Alf Wight, who writes that the book is “A must for all Herriot fans… This is a very worthy addition to James Herriot’s centenary year.”