Award-winning attraction, World of James Herriot in Thirsk celebrates its 10th Anniversary as a private sector business this April.

Ian Ashton, managing director of the attraction said: “It’s been a fantastic ten years developing the World of James Herriot into a world-class visitor attraction that welcomes people from all over the world. And it is all thanks to the small team of dedicated people working together here to provide the best experience for visitors to this much-loved former home and surgery of Alf Wight OBE (James Herriot)” 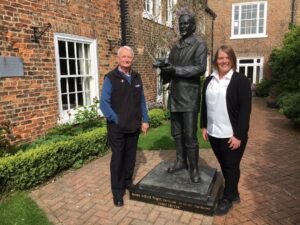 The attraction’s management and staff, the vet and author’s daughter and son, Rosie Page and Jim Wight have been recounting the many highlights of the ten years which, were it not for the interruption by Covid-19, has seen a continuing growth of visitors from around 15000 in 2012 to 38,000 in 2019.

Hambleton District Council originally set up the attraction in 1999 and the 20th Anniversary of the original opening was celebrated in 2019 with the unveiling of a new brass plaque to mark the anniversary and to recognise the important part played by Honorary Alderman Councillor June Imeson OBE, retired former Hambleton District Council Leader, in the creation of the attraction.

Current Council Leader, Cllr. Mark Robson remarked at that celebration event: “The marketing of the attraction since Ian Ashton took over has achieved a continuing rise in visitor numbers and thanks to Ian and his team, the World of James Herriot is the major contributor to the Thirsk visitor economy.”

Since 2012 the attraction has been developed further with new exhibits that include two original and restored vintage Austin 7 cars, one from the original film ‘It Shouldn’t Happen to a Vet’ starring John Alderton as James Herriot and another from the BBC TV series when Christopher Timothy starred as James Herriot and the late Robert Hardy, CBE FSA was the inimitable Siegfried Farnon.

2016 was the 100th Anniversary of Alf Wight’s birth when a statue of the world’s most famous vet was unveiled in the attraction’s garden and a celebratory black-tie dinner was held at which the four actors who played the main parts in the BBC TV series attended. Carol Drinkwater, (Helen Herriot) Peter Davidson (Tristan Farnon), Christopher Timothy (James Herriot) and the late Robert Hardy CBE, FSA (Siegfried Farnon). It was the first time in 25 years since the quartet had been together.

An exhibition at the State Darwin Museum in Moscow, Russia was a highlight of 2017 when managing director, Ian Ashton and marketing director, John Gallery were invited to Moscow to see a special James Herriot exhibition, and which began a cultural exchange arrangement between the two museums.

In 2019, an exhibition room about Channel 5 TV’s ‘The Yorkshire Vet’ that is based on the modern Skeldale Veterinary surgery formerly at 23 Kirkgate Thirsk was opened. Paul Stead, managing director of Leeds-based Daisybeck Productions and producer of The Yorkshire Vet TV series explained how Ian Ashton helped him to persuade Peter Wright and colleagues to take part in the programme. Paul said: “It is of course thanks to Alf Wight, the original Yorkshire Vet in whose footsteps we wanted to follow in bringing the modern version of a Yorkshire veterinary practice to the screen. It all fits perfectly with the James Herriot heritage.”

In 2021 another new exhibition room about the new Channel 5 ‘All Creatures Great and Small’ series was opened by Nicholas Ralph and Rachel Shenton who star as James Herriot and his screen wife Helen. The new series has enjoyed much critical acclaim and after the first two successful series, series three and four have been confirmed and will air in late 2022 and in 2023. The first two series are currently on the PBS channel in North America.

The attraction has seen many awards in its ten-year private ownership including the Welcome to Yorkshire White Rose Award 2014, VisitEngland Award for Excellence 2015, CPT Coach Friendly Award 2018, VisitYork Best Visitor Attraction Award 2019, Rural Business Award in 2020 and in 2021 the attraction was selected as one of the top 10% of attractions in the world by TripAdvisor.

“To know that the people who visit the World of James Herriot recognise and appreciate the experience that the team here deliver is second to none. We have a great team of committed staff and loyal volunteers and these awards help to make all of their efforts worthwhile,” comments World of James Herriot’s managing director, Ian Ashton.

The attraction is open every day except Christmas Day, New Year’s Day, and Boxing Day and attracts many coach groups, families and a large following of James Herriot fans. It is enjoying much new attention due to Channel 5 TV’s ‘The Yorkshire Vet’ and ‘All Creatures Great and Small’ series.

Ian Ashton added: “The Channel 5 announcement of two more series is cream on top of our cake and everyone involved at the World of James Herriot and Herriot Country Tourism group is so pleased to hear this news. The benefits to Thirsk and North Yorkshire will be immense”.